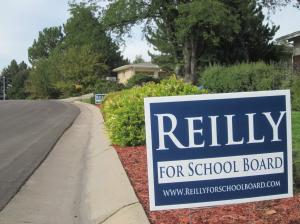 I grew up in a liberal household and a conservative community.  The combination forced me to grow up as a pragmatic liberal.  As I left my teenage years behind, my interest in nationwide politics started to wane.  The state and local level became far more appealing to me.  What our elected officials do at that level impacts us as individuals more than the federal government ever could.  That is how my interest in local government started.

My interest in the local school board, specifically, started with my mother.  I grew up with a mom who was also a teacher.  My entire life, I heard the strange things that the elusive school board was doing.  I never understood the decisions they were making.  How can you freeze teacher’s pay and approve an unnecessary Middle School Alternative?  How can you stop administrators from suspending or expelling kids instead of giving them the tools to deal with the situation?

Then, one day, I went to a meeting.  This elusive group of people was suddenly up close and personal.   There were less than ten people in the audience as they passed millions of dollars in measures without so much as passive debate.  The next morning, the local newspaper reported on about 10% of what I considered important from the meeting.  I was hooked.

I continued going to meeting for several months.   Alongside an old friend with high school, I initiated a recall of the School Board.  The recall failed due to financial problems.  As a result, however, I met dozens of district activists.   It was incredible.  I continued to go to all the meetings.  I met with the current school board members.  I continued substitute teaching—and started feeling like a spy.

As summer turned to spring 2011, I had to make a decision.  Four of the seven seats were up for election in November.  I wanted to run.  I went back and forth on the decision four times.  In the end, a conversation with an old friend from high school and her husband got me to fill out the paperwork.  I gathered the signatures and submitted them.

There was one catch.  I submitted an editorial encouraging people to run.  It worked.  With only four openings, 15 people submitted their paperwork.  It was going to be a clusterfuck.  The months that followed were incredible.  I made up signs and put them around town.  I met with dozens of people.  I also participated in three public debates.

The date for this memory—October First—was the strangest moment in the election.  It is the date of the Tea Party Debate.  Hosted by a far right-wing group called 9/12, I knew I was out of my element.  To add to the fire, the conservative newspaper in town has recently reported that I was an Agnostic.  I prepared for the debate for almost a week.  I talked at length with both my parents about how to answer questions about religion.  I was worried.  Even my open-minded parents had a hard time accepting my views on religion.

The debate was incredible.  I was nervous as I had ever been.  Nearly half of the questions were about religion.  They never directly asked us about our religion.  Moreso, they asked about teaching religion in the schools and alongside history classes.  I answered the questions honestly (like any history nerd would do).  In the end, it wasn’t religion that set me apart from the pack.  It was my support for a statewide tax that would fund schools.  Out of the twelve candidates that attended the debate, I was the only one who supported it.

It was a crazy experience.  I was 22.  I was in a debate with people ranging from 30 to 72.  I knew I was out of my element on multiple fronts.  Still, I held my own.  I knew I wasn’t going to win.  In the end, I summed up the changes I wanted into three bullet points.  By the final debate, other candidates were taking up the agenda that I was pushing.  By affecting the agenda of the people who eventually won, I did what I set out to do.  It was one of the greatest experiences of my life.

One thought on “Day Seven: Running for School Board”