On to Brew Number Two of the 100 Brew Challenge.  As I try to start integrating monthly brews into my life, I have created a goal above all others: Brew as many styles as possible.  With my last brew, I learned about the benefits of flavoring during secondary.  I also learned about how priming sugars relate directly to the structure of the head.  With this month’s brew I hope to learn a few new things as I make a Springtime Gose (while it snows outside–that’s Colorado for you).

With this brew, I am going to do something during the mash that I have only ever heard of.  I am going to add salt and coriander.  This will also be my beer with the lowest IBU–coming in at seven.  I know that hops is primary meant to keep beer from going bad.  So my hope is that this number will be high enough.  Since I am aiming for 45-50 bottles, I will likely have this brew around for a couple months, so I hope to find out.   Here is the recipe I will be following. 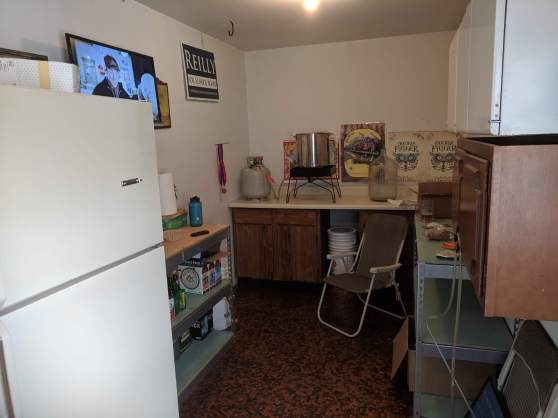 Before I started my second brew, I made a couple changes to my brewery.  As you can see above, the layout is a little different.  That is because we moved the fridge from the garage to the brewery.  This allows for me to keep all my ingredients (and beer) close on hand.  Since we don’t use this fridge for much other than beer and breast milk storage, there wasn’t much of a reason to keep it in the garage.  It’ll be nice to have everything I need right here.

The second big change was with the bottle situation.  Friends and family have been giving me their left over bottles for a couple years now.  When I moved into this brewery, it appeared that I had close to 400 bottles.  When I went to bottle Brew One: Vanilla Bean Cream Ale, I realized that the array of bottles would complicate things.  Some bottles don’t take normal caps.  Some bottles are way too big.  Some…had things growing inside of them.  Since we had so many, I decided to consolidate with the best.  We got rid of any that had any signs of not being properly cleaned.  We also got rid of the weirdly shaped ones.  In the end, I still have a little over 200.  And now I don’t risk having a beer spoiled by going into a bad bottle or not carbonated because the cap wouldn’t go on properly. 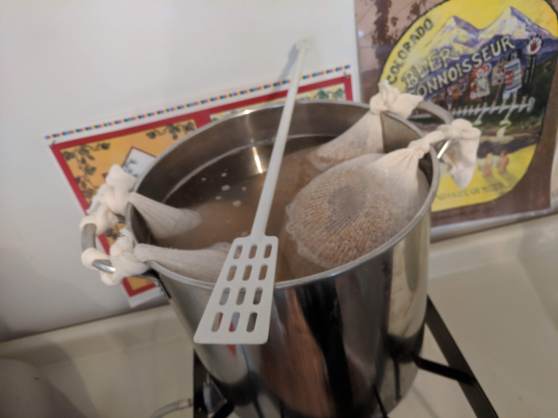 Anyway, I used four socks to start of the mash I did last time.  Except this time I actually have my thermometer (I found buried under hundreds of caps).  The socks are working beautifully.  Until a get a systems that does a lot of this automatically, these socks are going to be a part of my ritual.  The mash went off without any issues as I watched Mystery, Alaska.  Great movie.

With the boil, one of my primary goals for this brew was to end up with more volume.  So, at the end of the mash, I salvaged as much as I could by pouring hot water over the the soaked socks.  In the end, I was able to fill up the kettle barely to the top.  I believe this will allow me to get more than 500 ounces from this brew.  Hopefully more like 550.

As I got the boil up to temperature, I ground an ounce of coriander.  As I started the one hour timer, I put in the ounce of salt, coriander, and hops.  I put in a whilforic tab at about 30 minutes.  At then end of the hour, I flamed out the wort to about 200 degrees.  In the end, I was able to get a final wort of six gallons. 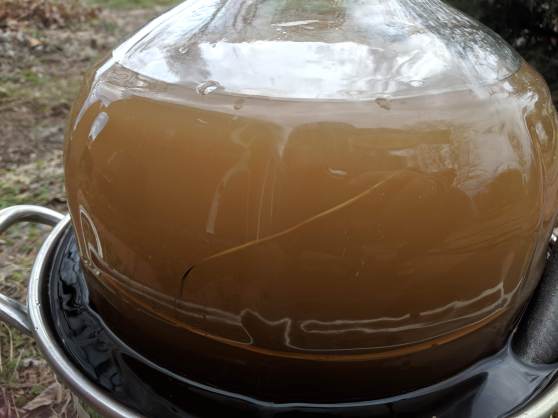 Emergency transfer to a new carboy before the crack spreads.

Well that was terrifying.  The moment I heard the cracking sound I thought I had lost the wort.  The carboy is dead, but I was able to safely transfer the wort to a new carboy.  This is going to be a nice lessons in patience.  I went far too fast in trying to bring the temperature down.  I need to go in increments.  Not try to do 200 to 70 in just a few minutes.  By the time the new carboy was full, we were down to 115 degrees.  So I left the hose in a let it run for awhile.

After it cooled down to about 70 degrees, I put in the yeast.  This time I remembered to take out the liquid yeast several hours ahead of time and activate it so it would be ready at this time.  After some violent shaking, I was ready to set everything up for fermentation.  Since Colorado is bipolar–with periodic snow followed by days in the 80s–I decided that the cubby under the stairs will be a permanent location for fermenting.  It is almost always 70s degrees there.  Some day I will get a true temperature control device or fridge.  But this will work for the time being.

Since life is endlessly busy, I didn’t really check up much on the fermentation process of this brew.  This may have been my downfall.  Between work and my baby, I remember only checking on it once and wondering if I had missed a build of the heading fermentation period.  I fear, for whatever reason, the the fermentation process never took hold of the full brew.  I was, however, left with a good layer of dead yeast.  So I could be wrong.

A lot of my family has become interested in my brewing since I started the 100 Brew Challenge.  So I decided to try to make what I was doing more accessible.  For one, it’s hard to fully gauge how much a carboy actually hold.  So, for scale, I took a picture of my four month old next to the carboy right after moving the brew to secondary. 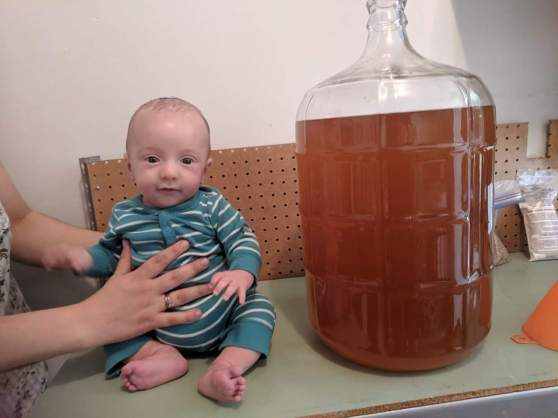 After secondary, I returned to work and life for another week and let the brew just sit.  It was worth it.  It doesn’t look like I got another picture, but I was able to take yet another small layer of yeast out.  This allowed for the final product to be quite clear.  I did this with Brew One as well.  I never used to do this secondary stage.  But it seems to be worth it.  The final product comes out incredibly clear and without “gunk.”  After a week in secondary, I bottled.  One of my goals after Brew One was to maximize the number of bottles I get out of each brew (Mainly because we plowed through Brew One since it was so good).

That may not sound like much but that nearly a 10% increase in output.  Well worth the effort.

After about a week in the bottle, I placed one in the fridge overnight.  When I poured it the next day, the carbonation was near zero.  I feared that I may have made a possible second mistake–not mixing in the carbonation sugars enough.  When I tasted it, I was quite worried.  It simply wasn’t good.  I don’t normally drink Gose, so it hard to know exactly what the taste is supposed to be…but it certainly shouldn’t have been that.  In the end, I did what every book, website, and forum said–I left it.  Let the carbonation do it’s thing and come back to it.  So we went on vacation and just left it out.  I fear this could have been mistake number three.  While we were gone, Colorado had some pretty warm days.  By leaving the bottles in the brewery, I feel they may have experienced temperatures over 80 degrees.  Damn.

When we got back from vacation, I put a six pack in the fridge.  When I poured the first one, some of my fear waned.  It was carbonated.  No where near as well carbonated as Brew One.  But at least it wasn’t flat.  The taste was much better.  Not great.  Kind of good.  Since then, I’ve had several.  I’ve started adding a lime wedge to each one, which actually amplifies the taste a lot.  The thing I’m discovering is that there is a different outcome with each bottle.  That means there was some uneven distribution–almost certainly with the carbonation.

Shake it off.  Every brew will not be amazing.  Learn from your mistakes and keep plowing along.  This weekend, I am going straight into Brew Number three.

Goals for Brew Three: Avoid Mistakes of Brew Two
1. Keep an eye on the fermentation Process
2. Make sure the carbonation Sugars are mixed in properly.
3. Keep bottles in temperature controlled environment.